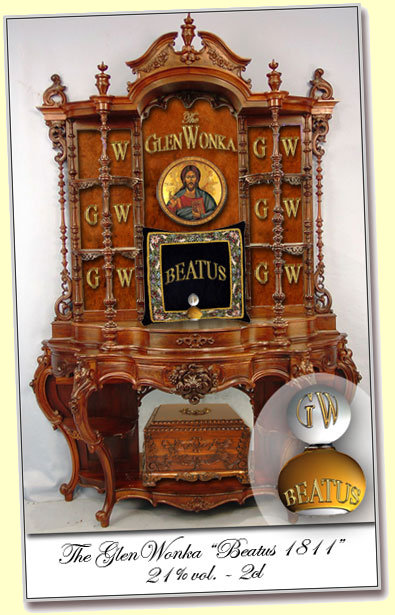 ‘Our whisky is for drinking, not for collecting!’ the Scottish distillers and bottlers always scream in unison, though this never prevents them from explaining how collectable their newest 15, 20 or 30 years old is, be it lavishly packaged or not. Lack of coherence? Double speak? Plain dishonesty? Probably a bit of everything.

On one hand, collectors may proportionally ‘destroy’ (ie drink) less products than ‘pure’ drinkers, but it’s also the aim of any marketeer to see as much of his products being sold AND ‘destroyed’. On the other hand, a genuine collector buys dozens, in some cases hundreds, of his favourite whiskies per year, so this small crowd cannot be sneezed at. The fact is that whisky collectors represent a small but steadily growing niche market.

“The number of collectors is increasing. The Yen is strong these days and the prices of some bottles are still reasonable — for the Japanese!” says Hideo Yamaoka, who owns a vast collection in Tokyo.

The problem for the distillers is that these ‘bloody’ collectors almost never listen! And when they do, it’s often with derisive grins and raised eyebrows. Tell them that this or that new bottling is ‘highly collectable’ and they will usually either burst out laughing or dash off. This, by the way, will not prevent a few of them from discreetly buying the new wonder, especially when they specialise in one brand and just cannot bear having a hole in their collection.

In my view, that behaviour borders more and more on masochism, as I’ve seen some collectors being thrilled with the news of a new 40yo priced at £5,000 that they just cannot afford to miss. ‘I do however think we are pretty close to the pain tolerance’, says Hans-Henrik Hansen, a Danish hotelier who owns the largest Glenfiddich collection in the world.

So, have prices risen too high? Most collectors answer ‘yes!’. “Basically, they have doubled in four years” says Olivier Humbrecht MW, an avid (but selective) Highland Park collector. “Some bottles reached a peak about fifteen months ago and it seems that there is a slight drop of 10 to 15% since then, but still, it is 100% more than back in 2003/2004. Some ‘ultra-rare’ bottles or some high scorers (95pts +) have increased by 300/400%!”

Geert Bero, a famous Belgian Ardbeg collector, confirms: “There are plenty of outrageously priced bottles out there that will be still available in a couple of years. And very young whiskies are being sold at too expensive prices”.

Although, as Yamaoka-san says, the number of collectors is increasing, it’s also the case that the heavily specialised collectors who will buy just anything bearing their favourite brand’s name (be it crystal decanters in plywood cases, umbrellas, lighters, peat scones or ladies’ sweaters) represent a minority. Many of them either quit collecting when some distillers brutally raised their prices two or three years ago, or decided to focus on old bottlings only, the easiest way not to fall into an ongoing sado-masochistic relationship with their favourite brand.

“The flood of small and special, exclusive bottlings at astronomic prices is killing the fun of collecting as the specialised collector knows beforehand that he will have a hard time completing his/her collecting horizon. At least financially!” says Sweden’s Ulf Buxrud, who has been collecting whisky since the 1970s. Recent marketing strategies have raised quite some eyebrows too. “Special editions, vintage releases, represent only a small percentage of production, they are often older versions; so higher prices can be normal. However, if distilleries use these special editions to increase reputation and image by marketing them at high prices, consumers may eventually reject them. In the same way, when distilleries release multiples versions, cask numbers, batches and label variations in order to feed the collectors’ market with many different versions that could have been vatted together, they also create some resentment and lassitude from the buyers.” says Humbrecht.

That said, the vast majority of the new collectors do not specialise at all, or rather specialise in exceptional whiskies only. Only reputation and word of mouth seem to sell to the ‘new collector’, even if some reputations may be undeserved. Why? Because they can see, on various auction sites, that only the most excellent whiskies see their value increase or even stay stable. For example, a fabulous single cask Ardbeg distilled in the 1970s can be worth more than £1,000, while a very similar but ‘less fabulous’ bottling will peak at £300 or 400. Very often, but not always, these much sought-after bottles are ‘poorly’ packaged, and don’t even come in fancy presentation cases, but the whisky inside is brilliant. Let’s not forget that’s also how the wine market works. Ever seen Lafite, Opus One or Grange in a mahogany box or a velvet pouch? If a new bottling is excellent, it will sell fast.

So, what’s the ideal collector’s bottle today? Probably a brilliant single malt whisky, not obligatorily old and not obligatorily from a blue chip distillery. “I still believe strongly in bottlings from lost distilleries. These are still sensibly priced compared to their big-name counterparts.” says Sukhinder Singh, from The Whisky Exchange, himself a big collector. “Today it is more about the whisky and most true collectors don’t give a damn what the bottle looks like. The simpler the better!” In other words, sober and elegant packaging, lots of data on the label (but no codswallop!), and a proper closure. That is to say a closure that’s not easy to replace by hand, otherwise faked refills would soon appear on eBay or elsewhere. Don’t get me wrong, fancy packaging and 20th century advertising drivel still work, just not among collectors. Ultimately and with the power of the new media, it’s the collectors who will decide on what’s really collectable or not, not the distillers/bottlers.

Are distillers/bottlers now seen as being too greedy? Govert van Bodegom, who owns a large Longmorn collection, says: “The prices are too high. Everyone in the industry, both distillers and independents, wants to make a profit. Every ‘whisky connoisseur’ is saying: ‘the whisky market will collapse soon’. But it still has to happen.”

Will the market collapse? I don’t think so. It’ll probably mutate towards a state where true collectors and oligarch types (smart and rich, but not educated in whisky) will diverge more and more. In short, the former may buy more ‘the liquid’ whilst the latter will buy more ‘the packaging’, but it is still to be seen if one brand can address both markets at the same time. I’d add, personally, that selling purely to the fickle ‘oligarchs’ while ignoring whisky-loving collectors is a dangerous strategy, unless you have no choice because you simply don’t have great whiskies in your warehouses.