(TEXT FROM MY BOOK, not to be copied without copyright note) 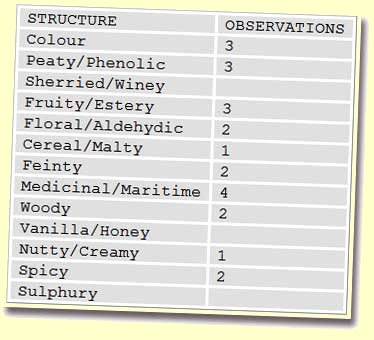 With influences from the MacLean Wheel, Philip Hills Bar chart and David Wisharts Profile table I have compiled a structure analysis chart not only to my own benefit but also for the purpose to demonstrate notes taken during the analytic phase.

A structure analysis chart or personal ‘observation’ chart is provided in conjunction with each descriptive taste note, throughout this publication. The chart serves as a foundation for the descriptive phase and is the key to the verbal elaboration.

Each chart element is ascribed a weight ranging from 0 to 5, except the colour.  The weights represents  0 for not present, 1 for a vague, 2 for low, 3 for  medium, 4 for pronounced and 5 for dominating  notes.  For the colour, the range is from 0 to 20 in steps of 1, where clear as water is set to 0 and dark as molasses is set to 20. The spectrum includes shades of light yellow to dark brown. The values assessed are not intended to be summarized and serving as a score for the whiskies.

The scope of each category element, except the colour element are;

Peaty/Phenolic/Smokey – Are not flavours from water that flows through peat bogs but where peat and coke is used in the kilning process. (Flavour range is light to pungent and from  mossy, earthy, peaty, phenolic notes to  bonfires, burnt heather and arson).

Sherried/Winey – Flavours from a cask’s previous content.
Its origin may be a range from various types of of sherry to other fortified wines like Port and Madeira but also table wines and its different grape varieties.  Madeira often contributes with a light oxidized note. (Flavour range is in conjunction with the casks previous usage).

Fruity/Estery – Estery flavours of fruity types are formed by acid reactions during the fermentation and maturation.
Others ore formed through catalysis during the distillation. (Flavour range is from pear-drops to fresh citrus and tropical fruits.  From Strawberry and other red berries to peach and melon. Dried fruit, sultanas and raisins but also Christmas pudding, fruit-cake and tart are frequent used descriptors for this category but also nail polish, varnish and acetone).

Floral/Aldehydic – Estery flavours of floral types are formed by acid reactions during the fermentation and maturation too, but also by aldehydes. The aldhydes forms when alcohol is exposed to air and during distillation in pot stills. (Flavour is aromatic and fragrant. Range is from leafy, sappy, new cut grass, hay, heather and herbal to greenhouse and summer meadows. Mint, violets and honeysuckle are other descriptors).

Cereal/Malty – Characteristics of the malted barley carried over from fermentation.
Usually disappears by long maturation. (Flavour range is from, simple grain and cereal to distinct barley. From mealy, husky, mashy to malt extract and biscuits. Yeasty notes and cooked veggies are other descriptors).

Feinty – Also known as tails or after-shots. It is the final spirit from the spirit still the end of distillation. The feints are low in alcohol, and the major part is returned for re-distillation. Feints are formed during the distillation as well as the maturation phase.  In small proportion they are the essential elements in the flavour of a whisky. If present above a moderate level it makes the whisky improper and undesirable. (Flavour range is from Hessian cloth and ageing books to leather and leather goods like car seats and saddles.
Tobacco and mustiness like naphtha are other descriptors).

Medicinal/Maritime – The maritime, the ‘salty’ notes are often said to be the result of maturing whisky in appropriate micro climatic conditions. Perhaps this may be a contributing factor but these notes, medicinal and maritime are in general developed by the fermentation and distillation process. The salt level found in whisky is not organoleptic detectable; however, it is not inappropriate to describe a sensory sensation as ‘salty’ even in the absence of such substance.  (Flavour range is from brine, sea foam, sea weed to salt and iodine but also turpentine carbolic acid).

Woody – Oaky aromas, bitter tannins and astringent mouth feel are derived from the oak container.  The tannins are related to time and the number of times the container have been used and contribute in moderate amount to the balance.  Longer maturation extracts more tannin but contrary to wine the tannins are not markers of quality. Excess tannins may show that the whisky acquired age but overshadows its attributes. A bitterness, not sweetness, may also occur from excess use of the only permitted additive, the spirit caramel (E150).

Vanilla/Honey – Vanilla and honey flavours stems from the oak species used for the oak building up the maturing vessels.
The vanilla-like and other aromatic aromas are mainly caused when the oak lignin undergoes oxidation during its contact with alcohol and oxygen. Contrary to popular belief Quercus Alba or American white oak, the wood bourbon barrels are made of, yields a lower concentration of vanillin than their European genus. So where does the strong scent of vanilla found in bourbons then stem from? The answer lies in the practice of charring. The honey notes may be released by catalysis of aldehydes during the distillation process but are usually extracted by maturation in oak cask of Quercus Alba type, especially new ones. (Flavour range is from heather-honey, butterscotch, fudge, toffee to caramel and vanilla).

Nutty/Creamy – The nutty flavours are built up in well matured whiskies and generally related to whisky of higher quality.
These aromas are lactones extracted from the oak vessel during the maturation phase.  Especially the European genuses of oak, Quercus Alba and Quercus Petraea, are rich in lactones with such properties.  The lactones also contribute to a buttery, creamy slight oily structure. (Flavour range is from coconut, walnut, hazelnut, almonds to chocolate).

Spicy – The spicy flavours are extracted from the oak vessel, especially new ones, during the maturation phase. Pine-resin like notes is occasionally found as a flavour from new oak wood. (Flavour range is from ginger, nutmeg cloves to cinnamon and pepper, but also cedar, sandalwood and pine).

Sulphury – The different copper parts of a pot still participate as a catalytic element during the various distillation steps.
For instance, this property removes natural sulphur formed and carried forward from the fermentation process and, further, contributes to chemical reactions during the distillation phase. Hence, experiments where vital parts have been replaced with stainless steel failed to produce adequate whisky.  These, unwanted, sulphur notes may enter during the course of the process at two instances; by new pot still or careless operating of the still; and by the hygienic treatment of casks.  The latter is a function of a not careful enough rinse of the casks after they have been sterilized by burning sulphur inside.