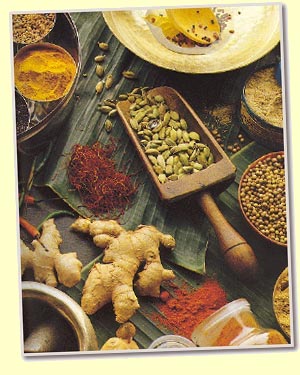 Johannes informed us about his plan to publish a series of articles about typical local flavours that might not be familiar to a person living in another point of the world. I will start with an explanation for three flavours I mentioned in E-pistle 2007/002.

1) Asafetida – Called Devil’s dung in Europe, it is a resinous substance derived from Ferula plant (native of Iran). The milk, when extracted from the stem or root of the plant is very pungent and sulfurous – and it very quickly solidifies as rock. It is used in cooking
mainly for digestive purpose and offers a typical strong smell not liked by many. I detected asafetida in the Bowmore 40yo 1966/’06 (43.4%, DTC Peerless, C# 3316) that was offered to me by Luc in Antwerp. Its presence was unmistakable on nose & palate and I immediately recognised it and uttered “Asafetida”. Bert, Luc and Davin who were with me had blank faces and did not understand what I was saying. I could not find sufficient vocabulary to explain it to them then, but later at Johannes’s place in Amsterdam, when I narrated the story, he too did not understand and had to Google it out. To re-establish my claim I asked Luc to send me a small sample of that Bowmore in exchange of a small sample of Asafoetida for him.

2) Guava – Guava is native fruit of Mexico and Brazil and is grown in the back yard of almost every home in India. Guava is to India what Apple is to western world. Like apple, guava smells and tastes different at different stages of ripening. The green one is hard and juicy and as it ripens it develops a strong and fruity smell. The ripe fruit is yellowish with soft flesh and tiny, hard seeds. It is a good laxative and some even consume it to get relief from piles. The ripe fruit has a lot of sugar content and I have tasted distilled guava liquor when I was in Bombay and I must say it is very good – far better than the smelly Goan fenny.
I detected ripe guava in Auchroisk 26yo 1979/2006 (56.7% Signatory Sherry cask) during the Malt Maniac’s Awards 2006. When I described the stuff as ripe guava, Johannes described it as something vaguely fruity. Yes, Johannes you might not have tasted a guava and that is why the taste is vague to you!

3) Betel nut – Also called areca nut is actually a type of palm fruit.
The nuts are small, say 2″ in diameter with very hard fibrous covering like coconuts. The whole nuts are greatly in demand throughout the country. The main use of the nuts is as offerings to God during religious ceremonies. It may also have some digestive properties but I am not sure. One cannot really describe it as bitter in taste but the texture on the palate is like extreme tannins on the palate. It is the main ingredient in paan, which is made with betel leaves, calcium hydroxide, dried tobacco flakes and other condiments. Chewing paan is India’s national pastime – undoubtedly. I get this betel nut taste in many of the extremely sherried Speysiders like Aberlour, Benrinnes, in some Port Ellens and several of the Glengoynes. This years’ Awards Gold medalist Macallan 30yo 1976/2006 (45.3%, Adelphi, C#2749, 206 Bts.) has this typical vagaru (the exact description of the taste of betel nuts in my language – Telugu).

Many other Indian tastes like green chillies, black peppers, cloves, cinnamon, nutmeg, coriander, cayenne etc are recognised in many malts even by western palates. Two of the typical Indian tastes which I am eagerly looking forward to find in SMSW are mango and curry leaf. It’s high time the Scots matured whisky in casks made out of mango wood or curry leaf trees!