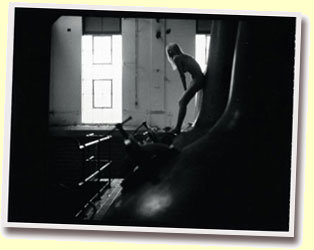 Macallan, their pedigree unquestioned, their achievements recognised thoroughly, long time favourite amongst aficionados of Sherried whiskies. What about such a landmark, the Rolls Royce of all things whisky? Talking about Rolls Royce, I can’t recall the epitome of car making doing any aggressive corporate advertising since World War 2. One might wonder why the liquid version is doing a limited series edition of the 30 years old, it has the kind of atmosphere in which we can see a Phantom ‘Break SE’ as an answer to a Maybach ‘Run of The Mill’ in order to sell loads of BMW 1 Series.

Lets keep the car metaphor and have a closer look at the ‘Break SE’.

What are the extra’s that would make this edition legimate? Well, a lot. Despite the slightly critic outline above I can really say we’re talking something special here. The black leather deluxe box is well understood, the same goes for the black capsule, the black neck label that says ’30 Years’ in silver typo also. We’re entering black room territories here. And yes, we do have a female nude on the label! In the box an actual Polaroid which stood model for the label. The ‘Break SE’ is now called The Macallan Masters of Photography.

Macallan invited Scottish photographer Ian Rankin to come over to Easter Elchies House to do a heritage series.
The goal was to capture the atmosphere, the light, to tell his visual story about Macallan and its surroundings. During a few summers days at the estate more than 2.000 Polaroids were made which were edited down to 1.000 for the final series. Rankin had a clear idea why he wanted to go the Polaroid way. If whisky is about time he wants to make a cross section of it with something immediate and not reproducible. And if matured whisky is a voice from the past what better way to use Polaroid? As an ‘on the side’, the model, Tuuli had suffered a lot from midges – anyone who has encountered the tiny flying bastards should imagine standing naked in the middle of a swarm… Art is suffering.

Visiting the presentation of the series for the Dutch market last April was no punishment at all.
What about a lunch in Holland’s most prestigious restaurant, De Librije? Knowing one has to make a reservation at least six months before the actual dinner takes place makes you wonder how on earth Dutch agent Maxxium managed to get hold of the complete place. Kudos to that alone! For the foodies amongst us. First course: Smoked IJselmeer eel with foie gars, fennel and Mac Vin accompanied with a h2h of Macallan 15 & 18yo Fine Oak. Second course: Scallops, lightly smoked and air dried lard with a sauce of brioche bread accompanied by a glass off 2005 Oremus Tokaij dry, Furmint. Third course: Pigeon with oranges, Pandan rice and a sauce of Lapsang Souchong tea accompanied by a glass of 2005 Mas Gran Crianza, Monstant. Final course Epoisse cheese, dates and brace yourselves: rabbits kidneys with water from cooked potatoes accompanied by a glass of Macallan 21yo Fine oak and an additional glass of Mac Vin. A Rolls Royce lunch indeed! After the meal a short introduction by Ken Grier whilst looking at blow-ups of some of the Polaroids by Rankin whilst sipping from a glass of Macallan 30yo Fine Oak (look out for the last batch, quality is up!) After a very enjoyable chat with Ken, interview will come later, I wondered why the seats of my Seat were so uncomfortable, I should have chosen the ‘Break SE’…

But then again, How many little cars have to be sold in order to pay the bills for the car the producer actually wants to produce and making loss on that matter? In other words, a mundane 12yo Fine Oak is closely connected to the 30yo Fine Oak Masters of Photography. One cannot exist without each other. During lunch it became clear Dutch shops will see a tsunami of 12yo Fine Oak. Well, when buying such a bottle, remember yours truly had a fantastic day and furthermore: you sponsored a great series. Your money is well spend!

Audience was divided when Bruichladdich launched their PC 6 in six different packages. One camp saying ‘I want all six’, the other ‘They’re fleecing the collector’. Macallan took it bit further: of the 1.000 Polaroids 1.000 unique labels were produced. Collectors: eat your hart out! The fact this series is so extensive, hardly limited yet every bottle is an ‘1 of 1’ carries ambivalence. Collector series are not my cup of tea but this is completely over the top. So much it becomes serious again. Not that I will ever buy this Macallan and frankly I’m curious to find out which of the two will become the true collectors item: the bottle or the Polaroid?