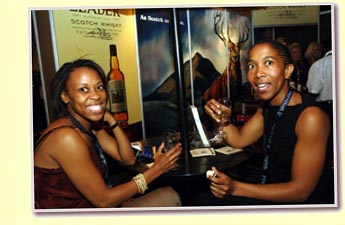 It was with some surprise that I received an email from Johannes asking me to report on the state of whisky in South Africa, in light of the upcoming Whisky Live festival.

Before I start  perhaps some history is in order: South Africa has traditionally been a beer and wine consuming society, with our wine making dating back to the 18th century when French Huguenots settled in the Cape of Good Hope bringing French vines with them. Consequently South Africa has been producing wine and consequently brandy for over two centuries. Understandably, brandy has up until recently been the spirit of choice.

In the last twenty or so years there has been a big move toward whisky (mostly blended stuff) due in part to massive marketing campaigns from the major distributors (Brandhouse , Pernod Ricard and company).  This has fortunately changed as a number of niche importers (The really Great Brand Company, De Toren, and Forbes Distributors amongst others) have started to import brands that have really only been available at duty free or certain specialist liquor outlets.

Of course one other main player William Grant, with Glenfiddich and its marketing muscle has really pushed the malt experience.
So now we find with regularity everything from Ardberg to Talisker. We are also able to get some Rare Malt and Old Malt Cask bottling as well. All of which are available at most outlets. So things are starting to look up. For the sake of this report I have focussed more on the festival and what was available rather than on the tasting itself. Perhaps in future I could contribute on recent tastings but for now here’s the feedback on the festival…

The Whisky Live festival 2006 was held for three days in both Cape Town (the most beautiful city in the world) and Johannesburg (my home town) during November. Judging by the attendance this year, the future for single malts in South Africa is looking extremely bright , close to 15 000  people attended the festival. This is a significant increase over last year which saw about 10000 visitors, I am told. In addition to all the distributors showing their wares, a number of sessions were held on whisky appreciation, whisky trends etc. These were given by some of the industries most respected and knowledgeable people.

Amongst the session leaders were; Dave Broom, Tom Morton and Jimmy Bedford (Jack Daniels). All of which were completely sold out , indicating that South African have not only a thirst for good malt whisky but also a thirst for gaining knowledge on the subject – a good sign indeed. In addition to them there were also a number of brand ambassadors from several distilleries. I was fortunate enough to spend some time with Steven Sturgeon – global marketing director from William Grant, who indicated that the growth of single malts in South Africa is very encouraging and the sub continent is an important part of their market.

So who was there? Well the festival could be split into 3 categories: single malts, blends and American whiskies
For the sake of this report I will forego reporting on the latter two.

As indicated above, we were fortunate enough to see a number of smaller brands being shown in South Africa for a first time through the “independent “distributors. Of particular note was Compass Box (distributed by De Toren) which attracted a large number of visitors to their stand. Their Oak Cross, Peat Monster and now discontinued Spice Tree (which I really enjoyed) was available for tasting.  It was a great pleasure to see Glenfarclas was on show from Forbes distributors and I was fortunate enough to taste their 25yo (which is definitely on the must have list). Forbes is also the distributor of Arran, Achentoshan, Bowmore, Connemara, Glen Garioch, Old Malt Cask range and Yamazaki. Naturally I, and a multitude of others spent quite a bit of time on their stand sampling their wares.

The other major independent distributor, The Really Great Brand Company,   had several stands, each showcasing their particular ranges, which include some of the world’s greats; Ardberg, Glenmorangie, Highland Park (disappointing though, no 18yo available to taste), Macallan and their number one product, Famous Grouse.  The Famous Grouse Malt range has done a tremendous amount to highlight malt whisky of late.

Moving on to the bigger players – Brandhouse, who also distribute Bell’s, J&B as well as Johnnie Walker , were showing their extended range of single malts that they represent in South Africa. These included Caol Ila, Clynelish, Cragganmore, Dalwhinnie, Glen Elgin, Glenkinchie, Lagavulin, Oban and Talisker. Being the size they are, they pretty much dominated the floor space with all their brands, and yes they did have their entire blended portfolio on show as well. Other notables were Pernod Ricard, with Aberlour, Benriach, Glen Keith, the Glenlivet, Longmorn and Strathisla were present albeit in a more subdued fashion.

Of course one cannot forget about William Grant & Son who have been the longest and most active company in promoting single malts in South Africa through their Glenfiddich brand. They had a great stand with an abundant number of knowledgeable representatives on hand (including Steven Sturgeon). Understandably Glenfiddich is the No.1 selling single malt brand in the country.

I should also mention that Balvenie and Laphroaig had a presence through the local wine producer Douglas Green.
In fact, De Toren (mentioned earlier) is also an excellent wine producer. A number of small importers were on hand, some with obscure offerings, some with well known product, like Bruichladdich, and others with some rare offerings (managed to try some St. Magdalene, a 21yo I think  – delicious!) , but  with the exception of Bruichladdich they are inconsistent with supply and generally tend to be quite expensive.

To some it up then, there is quite a wide offering in South Africa (including Dalmore, Springbank, Jura – who I did not see at the festival) , and growing all the time. It has taken the S.African market some time to acquire a taste for single malts, but the bug has hit ,and this can only mean good things for Malt lovers south of the Limpopo river. If there is anything that we are missing its perhaps the independent bottlings (Gordon and McPhails, James MacArthur etc) that are available in Europe and else where, but I believe some enterprising individual will recognise this and start to import these as well.

I would be remiss if I did not acknowledge certain people who gave me insight and provided me with information which helped in compiling this report: Jason Duganzich (Brand Ambassador William Grant & Sons), Shane Cogill (Forbes Distributors), Emil den Dulk jr. (De Toren wine and spirit) and Neil Hendriksz (Brand Ambassador The Really Great Brand Company)

Until next time, Slainte Mhor