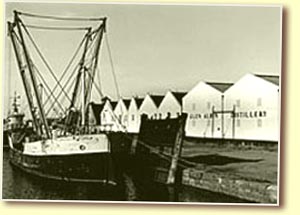 The site where Glen Albyn was built in 1846 carries a lot of Inverness history. Inverness was (and still is) the Malt Capital of Scotland, supplying most of the Northern Highlands and Hebrides with malt. As Inverness effectively run a monopoly on malting it’s obvious a lot of money was earned. So much that Inverness saw lots of investments in the form of breweries. The revolution of 1745 turned tides quite heavily. The malt trade was swept away and breweries became a thing of an golden era long gone. In 1846 only a few malt kilns and breweries survived while the rest fell into decay. Glen Albyn distillery was built on the ruins of a malt kiln. History never travels far…

In 1846 Glen Albyn (meaning Great Glen) was founded by Provost James Sutherland of Inverness and received its licence in 1847. Its precise location is unknown. It is known that in 1849 a fire destroyed several buildings and Glen Albyn seized production until 1850. In 1855 Glen Albyn went up for sale but as no buyers were interested the distillery was converted to a flour mill in 1866. Glen Albyn was (re)built in 1884 by Gregory & Co. and started producing again somewhere in 1891. It is uncertain if this was on the same location as the old distillery one stood, but the location of the new Glen Albyn is well known: Telford Street on the South bank of the Caledonian Canal, also known as the Merkinch District.

If the presence of having a waterway in your backyard was not enough, Glen Albyn had its own railway linked to the main Highland Railway Company line. For its days Glen Albyn must have been one of the most sophisticated distilleries. Refrigerators to cool the wort, a telephone connection between the distillery office/excise man and the head office in Inverness. Even the condensers and stills were the absolute pinnacle of distilling techniques. This is what Alfred Bernard wrote: “The condensing Worms are of the latest and best approved style, each still has from 300 feet to 400 feet of worm pipes; these worts, after the first few rounds, each branch into two smaller pipes, and, instead of being of the usual round form, are shaped like the letter D, having the flat side down. The reason for this is obvious, the spirit which at first rises in steam is condensed into liquid by the time it reaches these smaller pipes, and having to run on the flat bottom of these is spread over a much larger surface than if running in round pipes, and thereby gives a greater increase in the cooling power, which is a most important factor in the making of a good Whisky. The stills, which were manufactured by Fleming, Bennet & McLaren, of Glasgow, are of the most improved and modern style.”  Quite convincing!

Also of modern style was the behaviour of distillery manager John Birnie in 1892. He had a keen eye for the potential of the distillery he helped to built and in his view it was only fair to receive a good share in the company. Mister Gregory and his Company laughed in his face and in a rage of rancour Birnie left to start his own distillery. During the Great War Glen Albyn was requisitioned by the Admiralty and used for the construction of anti-submarine nets. If that was not enough, in 1917 when the Americans had uneasy excuses in the form of the 1915 torpedoing of Steam Ship Lusitania by the Germans and the Russian Revolution to come to the Old Land, Glean Albyn was converted for making sea mines. It’s my guess the perfect infrastructure: canal, harbour and railroad made it a perfect spot for this explosive conversion. The US occupation lasted until 1919. Already in 1920 ‘disaster’ struck again. Former manager John Birnie now cooperated with James Mackinlay and better known as the Glen Mhor Distillery took over Glen Albyn…

For years the two distilleries worked together in perfect harmony until 1954. Neighbouring Glen Mhor was the first to use Saladin box malting in Scotland and few years later it was introduced at Glen Albyn. Next big event was the selling of Glen Albyn and Glen Mhor by William Birnie, the 80 years old son of John Birnie sold Glen Mhor and Glen Albyn to DCL. DCL seized to use Saladin box malting in 1980 due to high costs and malting was done elsewhere. In 1983 it was decided to close Glen Albyn. A high costing, small output of a not much needed malt by blenders to which Glen Albyn delivered draw the curtains. In 1986 things got worse, the remaining buildings got demolished to make way for a shopping center. As written before, history never travels far, on the site a shop from the Comet chain sold the latest and innovative household appliances, when they moved several years later the food-chain Co-op took over. Selling amongst countless other items: Cereals and whisky…