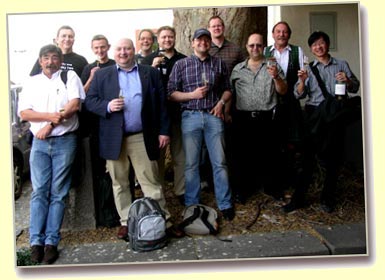 OK. Just so you won’t get overly disappointed, this story is not about a dozen drams. And it’s not even about German drams! But it is about a dozen memorable moments enjoyed while being in Germany, at least.

I was one of many fortunate souls that attended this year’s Whiskyfair in Limburg back in April. A most splendid arrangement that from now on has a non-removable entry in my calendar. At whisky fairs I sometimes enjoy a dram or forty. Call it a weakness or a strength. I call it madness.

While talking about madness… This fair is not only a meeting point for excessive amounts of super interesting malts, it’s also a meeting point for excessive amounts of certified malt maniacs! There were no less than roughly half of us present, many of which I met for the first time. A great bunch of guys who had the sense to bring not only their good spirit but also some good spirits (now that was a low one, I know…).

Hopefully we’ll break this attendance record the next year as I don’t think as many has been present on one single event before.

Anyway, from everything I enjoyed during these three days and from everything I brought back I have tried to distill the most impressive and perhaps also slightly unexpected experiences (& the two worst ones too). Hm, what does he mean with “brought back” some may wonder. For those of you who come from an excessively controlled country (such as Sweden) it should be clearly pointed out that you are allowed to bring the alcohol you buy at German fairs with you when, or if, you leave! So, geekish people naturally bring (hundreds of) empty sample bottles and fill them up on site and take home, as even the most hardcore liver will definitely succumb to the selection available in Limburg. This is a seriously awesome way to fill your spare time once you get home.

Back to the list. Don’t take the order too seriously. Everything in there is wonderful (except the last two).