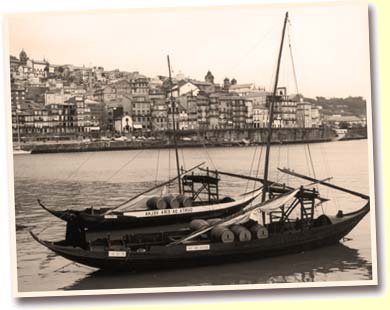 Approximately ninety percent of scotch whisky is aged in bourbon casks. Approximately ten percent is aged in sherry casks. Falling in the cracks of the approximatelies are a variety of casks ranging from Madeira to rum, but more than likely port. It wasn’t my intention to do a survey of port aged or finished malts, but since I have a bunch of them in my open stock, the opportunity presented itself. The fact that I am a lefty doesn’t hurt either.

Port aging usually adds red fruit and/or berries to the palate. This can work with or against the underlying flavors of the malt, so the results can be quite variable. These bottles are not generally available any more, so the main point is going to be see what can be learned from each particular expression.

86 – Benriach 12yo 1994 Port (59.5%, Signatory Vintage)
On the left side of the top of the label, it says ‘Heavily Peated’, and on the
right side it says ‘Port Wood Finished’. The end result is right down the
middle. The peat and the port dovetail nicely with each other. I would call
the final product moderately peated, with just enough of the fruit and
berries from the port to keep things nicely balanced.

There isn’t really much of the distillery character present, but that doesn’t seem to be the idea behind this dram. My wife likes it too, and she usually has little use for peated malts. Lesson learned: Creativity done properly and with restraint, can be a good thing.
(Available at www.binnys.com)

84 – Macallan 16yo 1989 Port (46%, Vintage Malt Whisky)
The color is bronze, without the telltale pink tinge usually found is a ported malt.
There isn’t any port in evidence on the palate, and it doesn’t taste much like a Macallan either. Obviously a refill cask, but while the port is long gone, the wood wasn’t used up. This is a pretty decent generic Highland/Speyside, but it is easily worth the $50 I paid for it

Lesson learned: Whatever isn’t in the cask, isn’t going to make it into the whisky.

The ‘why did they bother?’

83 – Bruichladdich 14yo ‘Turnberry Links’ (46%, OB ‘Turnberry Links’)
This Links edition has been finished in both sherry and port casks. It seemed pretty decent when I tried it at Whiskyfest 2006, so I bought a bottle. The only problem is that it was less good than the 100% refill sherry cask Augusta Links, and that was with just a tiny bit of the Augusta left in the bottle. And I liked the Augusta less than the 15 year old (first edition) which I paid the least for of the three. In fact, I like the 10 and 12 year olds better as well. The worst part was the $70 price tag, just $2 less than the spectacular Infinity, which was also bottled at cask strength. Now that Jimmy McEwen and company are deep into the Additional Cask Enhancement (ACE) program, grab any bottle of their original releases upon sight, if you liked the originals.

81 – Springbank 14yo ‘Portwood Expression’ (52.8%, OB ‘Port Wood Expression’, Bottled 2004)
This also seemed pretty good when I tried it California back in 2005. So I bought a bottle to replace the 15 year old, figuring it was a better deal, with higher ABV for the same price. Bad move. Under normal drinking conditions, as opposed to in the middle of a mass tasting event, it tastes essentially like a cherry lollipop. And this is not what I really want out of ANY malt, let alone a Springbank.

Lesson learned for both of the above: If you are distilling really great whisky, don’t mess with it!!

And the truly ugly

78 – Glenmorangie 12yo Port Wood (43%, OB)
The GM Port Wood expression was one of those Amazing Discoveries for many novice SMS lovers.
With a pinkish tinge compared to the standard 10 year old, a few drops of water really opened up the nose, with all sorts of fragrant aromas. With experience, this little trick became tiring, and I have come to really appreciate the 10 year old over the years. This bottle belonged to a friend of mine, and was purchased duty free around the beginning of 2006. Instead of the pinking tinge, it was quite dark, close to purple. And it was way too heavily ported, it isn’t worth describing whatever it tasted like. Hopefully, this was a bad batch, and the Port Wood finish has recently been replaced by the Quinta Ruban, bottled at 46% without chill filtering. But there is still plenty of the PW in the distribution channels, so stay away if the color is on the dark side.

While the effects of port aging shouldn’t be any different than sherry aging, in practice, that is not the case.
It would seem that each distillery that uses sherry aging has a target result in mind, while port is more of a gimmick. Some new and exciting expression designed to attract drinkers from the cocktail world, or something like that. So if you are attracted to a port aged malt, make an effort to try it first, or find a review from a reviewer whose ideas on this type of whisky match yours. Caveat emptor…