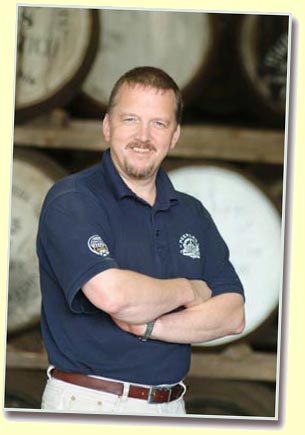 Hello Euan…
First of all, I would like to thank you for letting us take this interview from you. A first thing we wanted to know: How did you ‘fall’ into the whisky business ?

Euan: I was born into it! My family have been around this business for a long time as Millers, Distillers etc.

So, does that mean your current job at Duncan Taylor isn’t your first ‘whisky job’?

Euan: I started off as a Cooper and warehouseman a long long time ago at Glendronach Distillery and moved on through all departments, Mashing, Distilling, Cask Stock Room even a Tour Guide over a 6 year period at Wm Teacher and Sons Ltd culminating in my move to the Sales Dept at their headquarters in St Enoch Square in Glasgow. Yes its long enough ago that I turned malt on the original floors at Glendronach. As part of my training I spent 9 months at Ardmore Distillery.

What made you decide to take over Duncan Taylor? This seems to have been quite an adventure…

Euan: The business was offered to me by the Executors of a Family estate in New York and I was stunned by the diversity of whiskies on offer and the incredible quality. I just had to buy the company!

The understanding of a fellow malt maniac is that Duncan Taylor bought all the stocks of an American collector who had been collecting barrels for decades.  When he died his heirs sold the lot to the DT people.  Was the collector’s name Duncan Taylor, or is this just a myth altogether?  Where did the name come from?”

Euan: The guys name was Abe Rosenberg not Duncan Taylor. Abe was an entrepreneurial whisky man who built J & B Whisky in the US.
Duncan Taylor and Co Ltd was a company that he bought as an investment vehicle and also a “hobby” that he made money from.

Another fellow maniac wondered about how DT got to own so much stocks of old grain whiskies. A few years ago it seems you were the first ones to release some very old (and very good) single grains.

Euan: Duncan Taylor & Co Ltd has large stock of old grain and I bought it with the company.

Some people on Swedish whisky forums claim that DT has lots of casks of Port Ellen, while others claim they have none.
Any comments on this one?

Euan: It makes a nice blend with grain. Give me an old Bowmore, far superior whisky!

Another fellow maniac was curious about your ‘Lonach‘ series. He told us it consists of vattings of under strength casks with stronger variants in order to get the ‘vatting’ above 40%, in order to be legally called whisky. Is that correct?

Euan: Originally it was released as a vatting of casks that had gone under-strength with casks that are over-strength. Now it is no longer that, as we have no casks under-strength anymore. It’s a brand in its own right and is available in various markets.

Why, as an independent bottler, did you want your own distillery?

Euan: Because I was a Distiller before I became an Independent and I’m going back to my roots.

Why did you decide to build a new distillery? Why not for example buy an existing distillery with existing stocks?

Euan: Find me one and I’ll buy it!! There are none for sale!! OK maybe one that I know of!

Aha! Which one would that be – which distillery was ‘maybe’ for sale?
And what was it that made you decide that building a new distillery would be the best thing for Duncan Taylor?

Euan: I believe everything is for sale at the right price, however, in this industry most of the multinationals would rather close a distillery down than sell. With an exception of course. Building a new distillery is the best thing for Duncan Taylor as its the only way forward. Whisky companies no longer sell new fill to us minions and if they do its teaspooned and worse any mature cask stock that comes on the market is pretty dire stuff these days. Thank goodness Duncan Taylor has sufficiently large stocks of casked whisky to give the company time to get the distillery built and producing as some day the company will no longer have enough stock to survive if the industry keeps behaving the way it does.
We’ve a good few years under our belts yet!

Is there already any idea of a name for the distillery to be built?

We have heard it is going to be a ‘green’ distillery, can you please explain?

Euan: It will be entirely “Green”, fired by Woodchip and utilising many environmentally friendly materials including complex effluent regeneration equipment.

Excuse our ignorance, but wouldn’t solar power or wind power be ‘greener’ than burning wood chips?
Or electricity for that matter? We haven’t seen governments promoting a switch from central heating to wood stoves yet 😉

Euan: Solar power would be a great way of powering the distillery and thanks for the tip.
However, I havent seen the sun out of my window for 6 months. Wind would be great too, I can imagine a 60 metre high windmill in the middle of Huntly, errr whats the planning departments number…………………..

Good point about the Scottish weather 😉
And speaking about planning; are there already specifications about production volume, etc.?

Euan: On full production we will produce around 750,000 litres alc.

How many stills will be producing that whisky?

And have you already thought about ‘wood management’ at Huntley?

Euan: Wood management is very close to my heart and we have some innovative new ideas for controlling maturation.
Nothing that doesnt exist in some form or another already but with a new slant. We will be using Scottish Oak for part of our maturation plan.

What type of whisky would you like to make in this distillery?

Euan: A real Highland cause I’m fed up of all this hype about Port Ellen and Ardbeg and Islay. Give me a robust Highland any day!

What are the future plans for Duncan Taylor?

Euan: To become a Distiller!

Thanks very much for letting us have this interview.