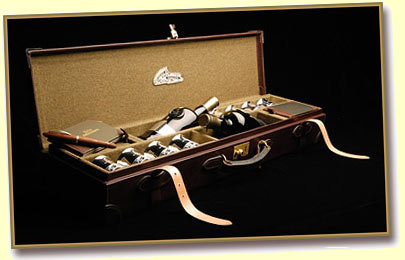 Much has been written about Ardbeg’s moves into the “ultra-premium” single malt market, as offerings like the Ardbeg 1965 and the “Mor” 4.5 litre “party-size” bottle are well out of the price range for mere mortals like the Malt Maniacs. Now, Ardbeg and its corporate parents at LVMH have gone all out with the $20,000 “Double Barrel” release. While the customer base for the “Double Barrel” is limited to hedge fund managers, Russian oligarchs, and anyone else with money to burn, the fact remains that this offering has two of the finest whiskies I’ve ever tasted.

First, let’s get the marketing details out of the way. The two 1974 cask strength bottles come in a shotgun-style leather case hand-made by the craftsmen who make Purdey gun cases, and the collection comes with eight silver cups from Scotland’s Hamilton & Inches. Just 250 were made (apparently counting the ones used for marketing purposes, such as the private tasting I was granted at LVMH’s New York office), and the suggested retail price is a whopping $20,000 USD.

One caveat that’s not been widely discussed…There were actually SIX casks used to make the 250 sets.
Two casks went into sets bound for Asia, two for mainland Europe, and two for the sets destined for the UK and USA. The whiskies I tested, obviously, were from the UK/USA casks. Ardbeg hasn’t said what happened to any extra bottles that came from the casks, but has admitted that a truly obsessed collector could try to get a set from each of the regions. Now… to the whiskies…

Cask #3524 (bottled at 44.9% ABV)
At first nosing, one would not suspect this as an Ardbeg. The usual (and much-loved) blast of peat is much more subtle and balanced with a fruity sweetness. It also has a slightly yeasty aroma that reminds me of bread baking in the kitchen, with just a hint of vanilla. Taste it, and the whisky immediately shows its true colors, exploding in a peaty blast. As the initial taste subsides, I found notes of citrus, particularly lemons and limes, along with the spiciness of cinnamon and even a touch of pumpkin. With a few drops of water, the nose reveals grassy notes reminding me of an autumn field, along with dried leaves and gingerbread. The yeasty notes from the undiluted nose return in the taste, with the smell of rising bread dough. This leads to the classic Ardbeg finish, long, smoky and chewy with hints of chocolate and marzipan that left my tongue tingling and begging for another taste.

Cask #3145 (bottled at 49.9% ABV)
The second bottle has a warm, amber color, and is slightly less viscous than #3524. Nosing it leads to a different sense as well, with hints of eucalyptus and pine. There’s not as much peat as in #3524, but there are more notes of leather that remind me of an old baseball glove. As for the taste…Holy S***! The two words I can best use to describe the taste are “thermonuclear peat”. This dram made my tongue stand at attention – and as the peatiness drifted off, notes of hazelnuts and walnuts came out, along with a bit of cinnamon and nutmeg. Adding water brings out hints of seaweed, iodine and salt water in the nose, with the spiciness lurking underneath. Water also mutes the peat explosion on tasting, releasing a smoother smokiness much like that of a candle just blown out. This continues in the finish, with notes of fresh bread as well.

Final notes: If I were to taste these again, I’d repeat the same order and start with #3524 followed by #3145.
The first cask is slightly more delicate and sets up the second one well. Reversing the order would likely overwhelm the nose and taste of #3524. As for the scores; both rate a 94 in my opinion. While each one is unique, they are both among the best malts I’ve ever tasted and deserve their high ratings. Are they worth $20,000 for the pair? No… not even with the case and the cups.
Are they great whiskies? Yes.

It’s hard to describe a $100 whisky as a “best buy” but compared to the “Double Barrel”, that label would apply to either the Ardbeg Uigedail or the Airgh Nam Beist. The “Oogie” warms the stomach and the soul with the classic Ardbeg charcoal and barbecued pork nose… a touch of honey in the taste, and a long, lingering finish with a bit of chocolate. The “Beastie” is less refined, as the name would indicate, and is perfect for a chilly night. I rate the Uigedail an 88, and the Airgh Nam Beist an 84. For the $20,000 one could theoretically spend on the “Double Barrel”, said peat freak could get 200 bottles of the Uigedail or the Airgh Nam Beist… and be the most popular person at Ardbegeddon!