Without question rating whisky is controversial. 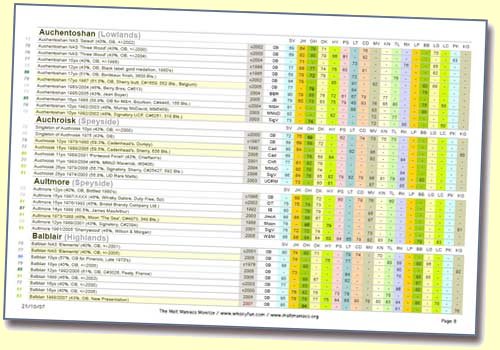 Popularized by Michael Jackson through five editions of his Malt Whisky Companion, whisky scores are much in vogue these days.  But when anything is in vogue there are always naysayers and Jackson’s success has, itself, brought detractors. Still, ratings are here to stay and I must admit The Companion often guided my early malt whisky purchases.  Even when I began to realize I didn’t always agree with Jackson I learned to adjust his scores to suit my palate.

Call it sophomore logic or say a little knowledge is a dangerous thing, but somewhere into my second year of seriously tasting malt whisky I hit the wall on ratings. My palate was developing and I found myself drinking more and more whiskies not found in Jackson’s book and unable to imagine what his scores would be.

How could he assign a number to something that was so subjective I began to ask dismissively.  My confidence was growing and by golly I was going to challenge the expert. Surely scores were just a lazy writer’s way of avoiding loquacious tasting notes.

Besides, if Jackson’s lowest score for a single malt is 59 and his highest 96, as in his 5th edition, wasn’t this really a 40-point scale?
But then real logic kicked in.  No, if your least favourite dram scored zero, then the impression would be that nothing could be worse.  Why would a malt not get half points – a score of 50, just for being drinkable?  And same at the other end.  No matter how fantastic that 1948 Macallan, shouldn’t there be a little headroom just in case something better comes along?

Then I joined Malt Maniacs and was encouraged to start scoring whiskies seriously.
At first I resisted, in part because my scores were all over the map and to defend that failing I had claimed that scoring just seemed so arbitrary, so relative, and so dependent on outside influences.  I mean, ask me two days in a row what my favourite dram is and I’ll give you two different answers.  At least.  How can you compare Lagavulin in winter with Rosebank in summer?

But slowly my scores became repeatable and I began to gain confidence.  The epiphany came in Speyside when five of us sat down and began scoring malts consistently within a point or two of each other.  My palate had developed to the point where I could reliably deconstruct a whisky’s traits and rank them.  Quickly I began to develop little techniques to help me score reliably.

First, when scoring in a group, I write my score down before anyone has a chance to say theirs.
That way I’m not influenced by others.

Second, I try to compare the whisky I’m scoring with some standards.  How does this whisky compare with others I know well?
When possible I make this much more objective by tasting the whisky in question directly head to head with Glenlivet 12 year old.  Glenlivet 12 is a whisky I know well.  It’s a nicely balanced, multi-layered dram with just a little bit of everything in it.  It’s predictable, reliable, available everywhere, and a dram I’d happily drink every day.  This is my signal whisky.  It is neither stunning, outrageous, nor bland and I have assigned it a score of 75 points.  On an enjoyability scale I compare every whisky to Glenlivet 12.

Third, when possible I try to score whisky blind.  This means I cannot be influenced by others’ opinions, by advertising, or by reputation, so my score is based on the whisky in the glass and nothing else.

Fourth, I take my time.  I used to say my score wasn’t final until I had finished a whole bottle of a whisky, but I soon noticed that after a couple of sessions the scores tended to converge.  I still like to try a whisky several times and linger over each glass, but honestly, subsequent scores rarely vary from the first, well-studied tasting session.

Finally, I try to score whisky with and without water.  Since you can never go back, this means pouring two drams, one to dilute and one to nose and taste at bottle strength.

Now, when I help judge the whiskies for the annual Malt Maniacs Awards, my tastings are all done alone, totally blind, in a neutral environment, with no distractions.  I try to taste each whisky at least twice, then go back and compare the ones with similar scores.  Little adjustments happen and slowly I come up with my final numbers.  Meanwhile, eleven other people around the world are doing the same thing, each in isolation.  Then, when the scores are all in, they are averaged to come up with final ratings based on twelve people’s independent opinions.  Only then are the identities of the whiskies revealed.  I’ve had some surprises, but so far no embarrassments.

Much of the criticism of scoring is based on the notion that ratings are arrived at capriciously, but most scorers I know take it seriously enough to avoid curry or chili before rating whisky, to seek a neutral environment, to taste but not drink, to accept that their tastes and therefore their scores will differ from others’ and to have the confidence to stick by their own impressions.  Most serious scorers know this is an art not a science and understand that from time to time they will surprise themselves.

Publicly declaring opposition to scoring too early in your whisky life can limit your pleasure later as you are then committed to an opinion that experience may change.  So before you make up your mind, follow my five simple techniques and over a period of months or years develop your ability to discern, differentiate and rank the little nuances.  Whisky is a wonderful contemplative, but it’s just that much more fun when you sit down and analyse it from time to time.

PS: you can find more thoughts on scoring whiskies in the ‘office’ section of the Malt Maniacs website…