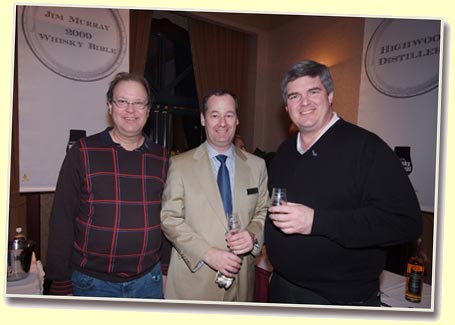 Here’s the thing about the Victoria Whisky Festival: it’s free for exhibitors.  So why is that such a big deal?  Well the organizers and the charities they support don’t depend on table fees to support the festival so they can say no to the marginal exhibitors who are turning up more and more often at whisky festivals.  No cigars, no chocolate, no craft-distilled kerosene, just whisky, and some damn good stuff at that.  Because, that’s the other thing. Since the exhibitors don’t have to pay a fee to participate, they have money left in the budget to bring out the good stuff.

Organised by inimitable Lawrence Graham, and I mean organised, the festival runs with German precision – the master classes, for example, are full and on time – but with the urgency of a Caribbean bonfire.  And although I saw no drunkenness, no staggerers uncouthly thrusting their glass at any stand come closing time, those who did feel they had a bit too much were offered a free ride home.  No, this is a class act put together by
and for whisky lovers, who, though they do turn a tidy profit, donate it to children’s charities and the local jazz society. As one exhibitor told me, only two other festivals compare with Victoria: the Australian Whisky Conference, a 1 week convention organized by Craig Daniels, and Whisky Live Paris which for square footage alone has to be experienced to be believed.

Being in Canada, the festival showcases a number of excellent Canadian whiskies not tasted anywhere else.  One hundred percent rye whisky from Calvert for example had Whisky Cast’s Mark Gillespie in whisky heaven. You don’t get that stuff in the USA do you Mark?  Gotta come to Canada eh? A full range of Crown Royals (only the XO was missing) showed the marked differences a skilled blender can create with the same base whisky.

Jim Murray was there, of course; he’s become a fixture of the festival, and was surprisingly candid about the Ardbeg Uigeadail he tasted there last year and named whisky of the year.  Yes, he knows it was not a special batch for Canada and yes, it is available in some European markets as well.  Yes, he got the abv wrong – a simple transcription error.  Yes, he knows that the BC Liquor Board only brought in one batch after the original shipment four years ago, and yes, the same batch is still available in government liquor stores in BC.  He was told, when he asked Glenmorangie where he could get more, that it had all been shipped to Canada.  And try as he might to anoint another, in one HTH after another it earned and re-earned his nod as best whisky of 2008.  Well, a bunch of us also tried it.  It’s good, yes, but it’s not OUR whisky of the year.  But, palates being palates, vive la difference!  It was good enough though that when Noel Buckley offered me a full bottle I quickly said yes!

At one point Lawrence handed me a glass asking, “What do you think of this?”
Well, it was fruity, creamy, rich, and mouth coating with fresh peaches, raspberries, and crème caramel overlaid on a bed of sweet cereal malt.  A good 84, 85 points, I like it a lot.  Turns out it was the private bottling Arran 10yo done for some of the folks who organise the festival.  Later, at the Arran dinner (man, I remember when that distillery was just a wishful thought and now it’s got a product as solid as any of the old timers) Lawrence handed me another with “Take a long taste he said and tell me what you think.”  42yo Black Bowmore; unmistakable, and unforgivable that I had nothing even close to offer in return.

Victoria is a sleepy city of gardens and ocean.  On the southernmost tip of Vancouver Island, it is both the tourism capital and the retirement capital of Canada.  Folks here know their whisky though, especially since the British Columbia government began to relinquish its monopoly on liquor sales and independent liquor stores began to pop up.  The Strathcona on Douglas Street specializes in malt whisky, which has likely contributed to the general good level of whisky knowledge at the festival.

For the first time, I was more than a part of the festival crowd; Lawrence had asked me to give a master class on judging whisky.  Thirty enthusiastic aficionados joined me for a morning session where we discussed the merits of five blind whiskies under 16 years old and came up with individual scores.  The level of questioning was excellent, with none of the usual bores asking questions just to show off how smart they are.

One of the highlights was meeting Mike Nicholson, ex-manager at Talisker.  A character and a half, he looks like a British rock star and speaks with a wit drier than a morning-after tongue.  Mike gave masterclasses on the full Johnny Walker range (including the King George edition Blue label) and on Talisker.  “Of course I have my own opinion of these” he said., “don’t think of it as whisky, think of it as liquid with flavours in it.”  Good advice to anyone who still at the stage where it’s either single malt or else crap.

A wonderful weekend of whisky and camaraderie.
Thanks to Lawrence, Carollyne, Iain, Jonathan and all who have put so much thought into my best festival yet.