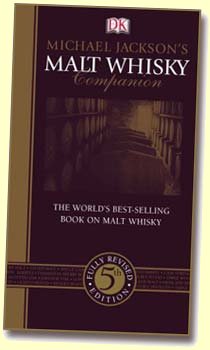 In July 1909 The Royal Commission on Whiskey and Other Potable Spirits reported to the Scottish Parliament that “whiskey is a spirit obtained by distillation from a wash saccarified by the diastase of malt” and “Scotch Whiskey is whiskey, as above defined, distilled in Scotland.”  This pronouncement ended a campaign by malt distillers to have grain whisky and blends, declared “not whiskey” and was the official end of more than 400 known years of malt whisky as the dram of Scotland.  Drowned in a sea of blends and dependent on the blenders for it’s continued existence in any form, malt whisky quietly disappeared from public consciousness.

When Michael Jackson’s Malt Whisky Companion was first published in 1989, the world was just on the cusp of re-discovering malts and Jackson, already an accomplished beer writer, provided the first distillery-by-distillery analysis of their flavours and aromas.  He was a man in the right place at the right time, with a pen that drew hundreds of thousands, possibly millions, into the mysteries and joys of single malt whisky.  Long before his fifth and final edition of Malt Whisky Companion hit the stores in 2004, Jackson had become a cult figure in the whisky world – THE cult figure – and far and away its best-known authority and most respected writer.

How did he do it?  First through steady, reliable, and descriptive reporting of what he smelled and tasted.  Although he begged forgiveness for his enthusiasm, he did not resort to fanciful malt-o-porn, but kept his descriptions spare and honest, with room for the reader to exercise his own taste buds.

It seems a right of passage for malt anoraks to spend a few years, first honouring Jackson’s tasting notes, seeking and generally finding the flavours he does, then suddenly to grow into their own palates and noses and begin to doubt The Master, only later to return when they recognize the individuality of each palate and the consistency of Jackson’s.

It was with this book that Jackson introduced the 100-point scale for rating malt whisky.  Though much criticized as too subjective or unreliable, Jackson’s scale is now the standard for serious tasters.  Those willing to take the time soon learn to interpret Jackson’s numbers and adjust them to their own palates, but better still, to repeatably rate whiskies themselves.

The Fifth Edition begins with what’s new in malt whisky.  Here readers of past editions are brought up to date on micro distilleries, Japanese malts, single casks, finishings, chill filtering, whisky and food, and collectors.  The volume of tasting notes has quadrupled from fewer than 250 in the first edition to over 1000, and Jackson apologizes for having to shorten some entries to make room for the burgeoning volume of new releases. The Companion is best known for its overview of all of Scotland’s malt distilleries, but it also provides a comprehensive and very readable primer to the components that go into making whisky.  More than just malted barley, water and yeast, the book talks about the whisky-making process, the equipment, wood and casks, peat and smoke, history and trends, and some of the more controversial events.  His four whisky regions, Highlands, Lowlands, Islands, and Campbelltown, are described, as are their whiskies, and their sub-regions.  The Companion is both a good reference and a great introduction to single malt Scotch.

Jackson loved malt whisky, in part, because it is an authentic product.  “Whisky is a real drink,” he wrote.  “A single malt is as real as it gets.”  He was particularly fond of The Macallan and was sometimes accused of being in their pocket.  Indeed, 27 of the book’s 448 pages are devoted exclusively to profiling Macallan.  Then, throughout the book he makes frequent reference to Macallan, describing, for instance, the richness of Golden Promise new-make tasted blind, or the pains the distillery takes to ensure a steady supply of suitable sherry casks. “The Macallan distillery receives what might seem disproportionate attention in the following pages,” he explains, “because it takes what might aptly be termed single-minded positions on almost every issue:  the variety of barley; the strains of yeast; the size of the still; and the provenance of the casks.”  Notably, tasting notes for the Fine Oak versions are not included in this edition.

Readers who have followed The Companion from the beginning have had a ride through the history of single malt Scotch in its heady blossoming.  Reading successive entries for Ardbeg, for example one goes in the first edition from two-pages with three tasting notes, for a distillery that has been closed since 1983, to five tasting notes for a recently re-opened Ardbeg in the second edition, four in the third edition, with questions of how the new Ardbeg will taste with the maltings remaining closed when the distillery reopened in 1989, to five pages and thirteen tasting notes for a re-reopened Ardbeg in the fourth edition, and fifteen more, including the PLOWED Society’s Ardbeggeddon, in the fifth edition.  Despite worries that Ardbeg’s quality may decline under new ownership, top scores improved from 89 for a Connoisseurs’ Choice Ardbeg in the first edition to 93 for an official bottling in the fifth.

Similarly, the history of other distilleries in this time of rapid expansion, the emergence of new distilleries and new malt whisky countries, and the growth of independent bottlers is tracked throughout the editions and summarized in the fifth.  To cover malt whisky’s growth over this time The Companion has expanded, (with a little help from Dave Broom, Jürgen Deibel, and Martine Nouet), from 240 pages to 448.

Jackson called this work Michael Jackson’s Malt Whisky Companion (in the USA it’s Complete Guide To Single Malt Scotch), and for many, it truly is a companion, with dog-eared copies showing up wherever there is whisky. Without question, the most influential whisky book ever written, the most copied, and with the fifth edition the best selling, The Companion is still very much current and is required reading for anyone serious about Scotch malt whisky.  And, with apologies to Gunn, Daiches, and Alfred Barnard, for so many whisky enthusiasts it will remain the book that started it all.

In his fifth edition Jackson talks of a sixth, but in an interview earlier this year he told Whisky Cast’s Mark Gillespie his publishers would not commit to a date, and he didn’t really have time to pursue them. With Jackson’s death in August 2007 that pursuit will never happen.  Let’s hope that the notes for a new edition are found in his papers and that some of the friends who helped Jackson with his final Companion (and contributed to his 2005 Definitive World Guide) will finish the job for him.  His legacy is intact, but that would be a fitting tribute.