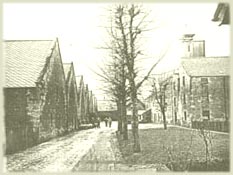 Glen Mhor (pronounced Glen Vawr, meaning Great Glen…) was initiated in 1892 by John Birnie and James Mackinlay of Charles Mackinlay & Co, the blenders from Leith. Birnie had left the Glen Albyn distillery two years earlier after a dispute about shares in the distillery. Next to Glen Albyn, he and Mackinlay started the Glen Mhor distillery and were distilling from 1894 onwards. Little is known about the equipment but there’s no doubt in my mind Birnie constructed his distillery to the same technical advanced standards as he did with Glen Albyn.

In 1906 the cooperation was made legal by forming a limited company. John Birnie, unlike he did at Glen Albyn, had to swallow his pride now, the Mackinlay Company became the biggest share holder. 1920 was the year for John Birnie, the Glen Mhor Company took over Glen Albyn Distillery and for years the two neighbouring distilleries worked together. In 1954 Glen Mhor caused revolution to be the first distillery to make use of the Saladin Box malting process. In 1972, William Birnie, the 80 years old son of John Birnie sold Glen Mhor and Glen Albyn to DCL. Sources have it DCL seized to use Saladin box malting in 1980 due to high costs and malting was done elsewhere. In 1983, whisky’s darkest year, DCL decided to close Glen Mhor. Small output at relative high costs and a possible need for renovation in a down market sealed the faith of this distillery. After 3 years of decay the building were ripped apart to make way for a shopping mall. Just what we needed…

History of Glen Mhor seems to be quite dull most of the times. The acquisition of Glen Albyn and the Saladin box being the two outstanding events of its history. These days we can make things a little bit more exciting. I strongly suggest you do a H2H between Glen Mhor and Glen Albyn. Diageo has an excellent Glen Mhor 22yo 1979/2001 and an evenly excellent Glen Albyn 26yo 1975/2002 in their Rare Malts range. Try to track them down and plunge yourself in some Merkinch District history.