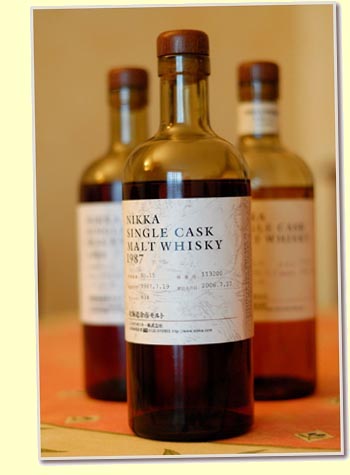 I still remember when, many years ago, a guy on a Usenet group said: “Try some Suntory. The Japs decided to make their own whisky, and damn they made it good!”. Well, at the time I was not very much into whisky: there were a handful of Scotch single malts I knew and I enjoyed, but my knowledge of the topic was very poor, to use an euphemism. So, I didn’t take into account his words…

Years later, in 2005, triggered by the excellent movie “Lost in Translation”, my usual interest for many oriental things (including movies!) and the fact that my liquor store started selling two Suntory expressions, I decided to try some… One of those two bottles was the standard Hibiki blend, which I still haven’t had the courage to try so far due to the high price (higher than a single malt, and I don’t usually rave about blends), the other was the “Pure malt” (but actually a single) Yamazaki 12yo, from the Suntory-owned distillery in Osaka (the oldest distillery in Japan)

Yamazaki 12yo (43% OB, Bottled +/- 2006)
Nose: Nutty, vanilla, oak. Wood varnish solvent. Bourbonish.
Palate: Initially, a dry and nutty attack, like a bourbon. Then lots of sweetness and vanilla oakiness. Quite unusual, like a cross between a speysider and a bourbon (but never as cloyingly sweet and resiny as some). A bit sherried, some almonds, cedar and acetone. Very appetizing. A bit thin and metallic, even slightly acidic.
It should appeal to Jack Daniels fans.
Finish: Nutty, with dried grapes and an almost perfumy echo.
A little burn, which surprises considering the smooth palate. Dry.
Comment: No great evolution with time in the glass, and perhaps too bourbonish and with excessive cedary and acetone notes. Definitely interesting, but on the long run perhaps a bit cloying and unbalanced. Score: 81 points.

My first encounter with Japanese malts had been interesting, but not completely satisfactory: good and “different”, but I still preferred the style of malts coming from Scotland. Later on, when I went to England in 2006 to see the stunning Depeche Mode concert in Manchester, I stumbled into another weird Japanese malt at the duty free shop of Luton Airport and I had to try it (mostly attracted by the unusual square small bottle, similar to a perfume, and by the label which was almost completely in Japanese):

Nikka NAS ‘From The Barrel’ (51.4%, OB, Btl. ca. 2006, Batch 22E34A)
Nose: Heavy dried and candied fruits, burnt sugar, acetone and freshly sawn wood.
Palate: Overwhelmingly sweet and intense, with lots of candy floss, burnt sugar, dark chocolate and nuts.
Maybe a whiff of peat? Some licorice and gentian root, too.
Finish: Tannins raise their head, but they are quite well-behaved, with no late bitterness.
Comment: Again, another definitely interesting but weird malt. Difficult to mistake this for a Scotch: it has bourbony notes, it’s not the most typical Japanese malt, either, but it certainly avoids direct comparison with any other thing I have tried so far. Score: 84 points.

I later discovered that this “From the barrel” was actually a blend, which I would have never suspected from its taste profile!
Yes, it’s a blend of malts from the Sendai and Yoichi distilleries, and a grain whisky. Ok, maybe someday when I will have some spare cash I should actually try that Hibiki, since it seems that the concept of blend in Japan might actually be better than that of the Scots… Some months later, after the surprising results of the 2006 Malt Maniacs Awards, I felt that I had to explore this world further.

I hadn’t participated in the Awards, so I had missed the reportedly wonderful Yamazaki tasted by my fellow Maniacs, but I found myself with some spare cash and decided to order on the Web some random bottles which I had been wanting to try since months and which were not available in Italy. It looks like it was worth the effort, and confirmed the discovery that other Maniacs already had made at the Awards: that Japanese malts, while often very different than Scottish ones, can truly be excellent. At times, they can even easily sneak and pass as Scottish clones, but regardless of that they are often very good and intense experiences of their own. So here we go with the tasting of the new six bottles in my possession (two again from Suntory, owner of Yamazaki and Hakushu, and four from Nikka, owner of Yoichi and Miyagikyo – also known as Sendai)…

Hakushu 12yo (43.5%, OB, Bottled +/- 2006)
Nose: Bananas, candied oranges, ripe apples, blossoming roses, nail varnish. A faint whiff of peat.
Vanilla, again like in bourbon (but not as intensely woody as in Yamazaki 12, and in this case not cedary at all). Young wood furniture.
Palate: Sweetly malty, with the faintest of peat. Reminiscent of Bunnahabhain, perhaps, or a Balvenie 10 Founder’s Reserve.
Not particularly complex, but sort of “pure”, cerealish and clean, with no frills or evident flaws.
Finish: Mineral, malty, clean and increasingly spicy and slightly peppery.
Comment: A very “plain” malt but in the good sense of the word, meaning that it doesn’t relay on big sherry, strong peat or other extravagances to capture the palate. And yet, it captures it indeed: a good “natural” experience, neither too delicate nor too overwhelming, simply very well balanced. Score: 84 points.

Miyagikyo 1990 (54%, OB, C# 27216, Warehouse 20, D. 1990.11.8, Btl. 2006.7.26)
Nose: White wine, aromatic herbs, coriander, damp earth, crème brulèe, tonic water, dry and slightly bitter (orange peel).
Not the most expressive nose among these Japanese malts, quite restrained. But give it time and it gets pleasant and oakier.
Palate: Dry and slightly bitter at first (again, classic Schweppes tonic water), then gets sweeter and malty, with banana, vanilla and “Sprite”, but still on the bitter side like a fresh lager beer. Not a lot of flavor evolution but interesting.
Finish: Slightly smoky, malty. Some mint and candied orange. Again, slightly and stimulatingly bitter.
Comment: Intense on the palate, but with a slightly limited flavour palette. Quite austere but not unpleasant at all. Score: 83 points.

Yamazaki 18yo (43%, OB, Japan, 70cl)
Nose: Haha, this is evidently sherry matured (or at least a big part of the casks which went into it are)!
Yes, definitely better than the 12yo, although there is still that initial strong impression of wood varnish… and even glue!
Nutty, but also drier and more winey than the younger version. Rubber-coated medication bandages, overripe red apples, some licorice.
Palate: Rich and luscious, soft but intense. Refreshingly malty, but also with many fruity notes: oranges, apples, apricots.
The oak is less astringent, acidic and sharp than in the 12yo. Belgian double malt ale (Chimay?), English bitter, nuts.
Finish: Increasingly spicy, and no marked bourbonish or cedary notes.
Comment: The extra years of maturation and the higher percentage of sherry casks in the vatting make a big difference compared to the younger version. A rich after-dinner malt, but not too heavy or extreme to scare away lovers of delicate whiskies.
Apart from the nose, it could almost pass as a Scotch single malt. Score: 86 points.

Yoichi 15yo (45%, OB, Bottled +/- 2006)
Nose: Salty, slightly peaty and seaweedy, sort of Bowmorish. Getting nuttier, minty and slightly winey with time.
Palate: Very nutty, full of integral breakfast cereals (the unflavored kind, of course) and sort of flowery. Again, slight peat (almost imperceptible, like an old style Bruichladdich or a Bunnahabhain). Integral bread.
Finish: Bitterish in a freshly poured dram. After a couple of minutes in the glass, delicately malty and slightly oily.
Comment: Perhaps the less “distinctive” bottling in this comparison, but still very enjoyable.
Highly drinkable and screaming “quality”. Score: 82 points.

Yoichi 1987 (63%, OB, C# 113200, Warehouse 15, D. 1987.7.19, Btl. 2006.7.27)
Nose: A bit too alcohol-dominated, even with water. Evident sherry and peat. Denaturated alcohol. Similar to some well-peated Juras.
Give it time, and it will develop into sandalwood, licorice, incense, old furniture and even a hint of Brora-like waxiness.
Palate: Syrupy, oily, thick. Spent ground coffee, huge fireplace smoke, then a dark and brooding sherry influence.
Raisins, mint, camphor, propolis, rubber bandages, sandalwood and lavender (no, not the unpleasant FWP of some Bowmores!).
Finish: Long, extremely smoky… I feel like I have eaten lots of unsugared licorice and then smoked a pack of Gitanes!
Comment: A true powerhouse! One of the most intense malts I have ever tried, even with water!
On the palate it reminds me a bit of Talisker 20yo 1981/2002 (62%, OB, Sherry, 9000 Bts.), but more peated and perhaps slightly better integrated… though not for the faint of heart! Score: 91 points.

So, it seems that we can’t really identify a typical Japanese profile…
I wouldn’t even dare to identify some consistent regional or distillery styles, though for example Hakushu is a mountain distillery, Yoichi is usually considered Highland/coastal, and Miyagikyo is “Lowland”. These regional labels in my opinion neither seem very much to apply if used in comparison to Scottish malts, neither as standalone ones. Maybe I can feel something coastal in Yoichi, that’s all…

Leaving alone these pointless thoughts, one thing is certain: once again we have had a confirmation that Japanese malts can be truly interesting. Can they replace the flavors of a Scottish whisky? No, but they are a worthy alternative. As this little comparison shows, there are several different flavor profiles to be explored… some of them quite stunning and unusual. Of course not being able to find these bottles in bars and in many stores does not help, but in the world of free commerce it might be worthy a few minutes of your time to do some online shopping and discover this fascinating new world with your own senses…