There is nothing in the world that will bring you closer to a fist-fight with a fellow connoisseur of whisky than to start talking about whether to add water or not to your dram! I’ve received some downright nasty emails from people whom I was razzing about their propensity for not adding water (and those who like to add ice!). However, as a former graduate student and chemist for 3M Company, responsible for specialty chemicals, there are two things I know about: chemistry and alcohol. I hope that I will be able to convince you from a scientific point of view that there is good cause to add water to your dram.

As we are all aware, whisky is a mixture of alcohol and water in the ratio of a minimum of 40:60. There are also other components present, but in much smaller concentrations, usually under 1% of the total volume. These other components are what are responsible for the aroma and flavour attributable to malt whisky. They are usuallly either water-loving, water-hating, or in between. Many whisky lovers do not like to add water to their dram for fear of diluting these flavours. However, the science points to an “opening up” effect following the addition of water to your dram. Here’s why.

Alcohol is both similar and dissimilar to water. It is a chain of two carbon atoms terminated with two thirds of a water molecule, an –OH. It is therefore both water loving and water hating. The –OH portion loves to be surrounded by water whereas the carbon chain is not very fond of water, it is more like an oil (surely you’ve heard of the historical mutual antagonism between “oil and water”!)

In such molecules a curious phenomenon occurs. If you add a little bit of these molecules to pure water it will first coat the surface of the water, with the –OH pointing into the water, and the carbon chain facing upwards into the air.

This has the effect of lowering the surface tension of the water, increasing the propensity for a drop of water to “spread out”. You can often see this phenomenon when you prepare a rum and coke. Add coke to the ice and watch it foam up, then add your alcohol and watch the foam get “knocked down”. What you are witnessing is a surface active agent – or surfactant. 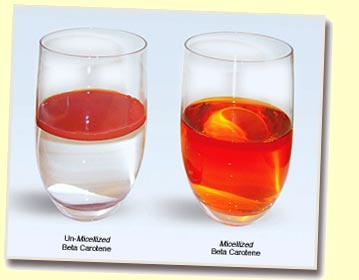 Surfactants are the main ingredient in soaps, detergents, window cleaners, and zillions of other products. But what happens if you keep adding surfactant? Well, once the surface of the water is covered with a monolayer of surfactant, they have nowhere to go but into the water. Once the concentration of these surfactants is high enough, they organize themselves in a very specific way. Remember, the tail HATES water so they tails stick together while the –OH head LOVES water and so faces the water. The resulting structure is a little spheroid where all the heads are on the surface of the sphere and the tails are in the inside. This structure is called a micelle. The micelle’s interior is more “oil like” while on the outside it is essentially water. It is precisely inside of these micelles where many of the oily aroma compounds congregate, a safe haven of sorts. Have a look at the sample of water above. On the left is a sample of water with beta-carotene floating on top. On the right, look what happens when micelles are present. The otherwise water-hating beta-carotene is now dispersed and dissolved into the water.

Now in my industrial experience, 90% of surfactants are made up of chains of at least 8 carbon atoms. Many of the fatty acid and ester aroma compounds in whisky would fit the bill and may act like surfactants forming micelles in their own right. If it hadn’t been for the persistence of a fellow whisky lover Nick Ramsey, I would NEVER have discovered that ethanol (alcohol) could behave this way, but it does.

It does so at a much higher concentration than industrial surfactants, at around 20% by volume. Industrial surfactants work at concentrations much lower than 1%. Nonetheless, ethanol can behave as a surfactant and form micelle-like structures. In fact a couple of Japanese researchers confirmed that between 10-90% ABV, such mixtures form ethanol-rich clusters, not micelles proper, but much the same idea. With whisky at 40% alcohol by volume, this is most likely what is occurring.

So what about adding water? Okay, I’m getting there! Imagine now that you are adding water to your whisky. As you do this, the concentration of alcohol is diminishing, and the size and number of micelles is diminishing, the reverse of when you add surfactant to water! As this happens, the number of micelles is also diminishing so that the aroma compounds that hate water have no choice but to flee this inhospitable environment. The only way out is up into the air, or to precipitate out as a solid, hence the haziness that occurs when water is added to non-chill filtered whisky. 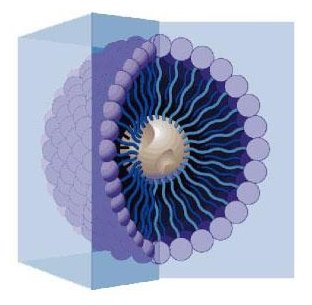 Did you also know that water warms the whisky? Yep, that’s right. As you add water to the whisky, you are mixing two different liquids, each with different
arrangements of molecules that are simultaneously mutually attracted and repulsed. Since the attractions are stronger, the liquid stays together. As you mix whisky and water together, you have to break the attractions and reform a new equilibrium of attractions and repulsions. Mixing water with whisky causes the attractions to be a little stronger, that is to say, that they form stronger intermolecular bonds. Try mixing 10 ml of water and 10 ml of ethanol, you get LESS than 20 ml of liquid because the molecules are grabbing hold of each other more tightly, or bonding. When bonds are formed, molecules move less, giving up their energy, in this case heat. This heat then contributes to a temperature rise, we call this the heat of mixing.

You can try this at home, but use rubbing alcohol if you don’t want to waste good malt. Take a cup full of rubbing alcohol 99%, place a thermometer and read the temperature. Leave a cup of water alongside the alcohol for an hour to come to the same temperature. Pour some of the water into the alcohol and keep your eye on the thermometer… WOW! You’ll see the temperature rise by up to 3-4 C. This thermal energy is then used to help those poor refugee aroma compounds leave the dwindling number of safe havens in your dram. The temperature rise also causes the micelles to disassemble, again forcing out more of the aroma compounds.

Finally, one cannot forget the fact that as you add water to whisky, it becomes more water like. As this happens, the aromas that are “oily” become unhappy refugees that are forced to flee by the hordes of belligerent water molecules. Aided by the thermal energy provided by the heat of mixing, and the diminishing number of micelles, these aromas reach escape velocity and leave your dram and reach the orbit of your olfactory sensors.

It is plain to see now that the next time your favourite uncle says “I never add water to whisky, it ruins it”, you can explain the scientific reason for doing so. Adding water does “open up” the whisky, and there is a scientific rationale for this phenomenon. However, not ALL whiskies handle water well. As you know, some palates and noses collapse with water, while others blossom. Some individuals enjoy whisky without water, while other can’t stand it without. It is certainly a matter of individual tastes. One should, however, feel free to experiment with water to fully explore the possibilities it brings to the enjoyment of what is considered by many to be the nectar of the gods.