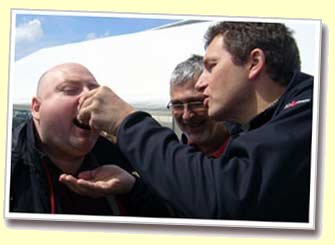 Pffft…. the past few months have been very hectic here in Amsterdam. Worst of all – I had to skip Feis Ile 2007, so I didn’t have my usual ‘wet vacation’. Too bad – but I should be able to make it next year. And the good news is that Serge has reported about it so lively on WhiskyFun that it almost feels like I did go. And thanks to the many miracles of modern technology those reports came with pictures these days – like this one of Olivier feeding a fresh oyster to fresh maniac Konstantin at Lagavulin. That’s a ‘Feis Ile’ tradition at Lagavulin that goes for every maniac. Well, not the ‘feeding’ part – but Konstantin resisted tradition…

Anyway, due to my busy schedule I’ve had hardly any time to sit down for a serious sampling session. Because the reconstruction of the Malt Madness and Malt Maniacs websites takes much more time than I anticipated I don’t have time to update my Liquid Log on a regular basis. That’s why I decided to put my log back in the freezer for now and keep everybody updated on my Liquid adventures via Malt Maniacs.

Unfortunately, I’ve been suffering from a string of ‘bad nose days’. I just don’t like to drink good whisky when my nose isn’t in top shape. Still, I managed to scrape together my notes for a dozen recently sampled drams. I’ll get into some ‘conceptual’ and ‘strategic’ topics concerning the future of Malt Maniacs in the next issue, but for now I’d like to share my notes on a dozen of the most noteworthy recent notes from my ‘Little Black Book’. You can find my complete ‘Dram Diary’ with all my seriously sampled drams since the last update of the Malt Maniacs Monitor on the front page of the Malt Madness website.’
So, here are my tasting notes for ‘a dozen diverse drams’ – mostly long overdue samples on my shelves;

1) Benriach 25yo (50%, OB, Bottled +/- 2006) – a bottling that I gave 80 points during the Malt Maniacs Awards 2006.
Nose: Initially it’s richer and spicier than I remembered. Malty, flattening out. Fairly neutral, but nicely balanced.
Honey sweetness after a few minutes. Mint? Metal? Clear improvement over time, ending around 85 or 86 points for complexity.
After adding a few drops of water I got more metallic and ‘dentist’ smells in the foreground. Poppy seeds? Gorgonzola cheese?
Taste: Not as good as the nose; feels a little rough. The distinct herbal and piney flavours are not quite up my alley.
Maybe a flash of lightly salted liquorice after half an hour? Definitely interesting, but too much pine for my tastes.
Verdict: I’ll crank it up to 81 points . An average of 80 points at the start and 82 points after half an hour.
And I should stress that based on the nose alone it could have reached 85 or 86 points in my book.

2) Glen Grant 50yo 1956/2006 (40%, G&M) – a sample I received from Hans Offringa, a Dutch whisky writer.
Nose: Rich & fruity; clearly from a sherry cask. Currants & black berries. Profile like a red wine! Hints of smoke and wood.
Refined sweetness. Very concentrated nose at just 40%. Almost like a liqueur or reduced wine sauce. Cherry Marnier? Kirsch?
Evolution and growing complexity in the fruits. Meanwhile, hints of soy sauce emerge. Something vaguely meaty?
Based on the nose alone this would surely reach the 90’s (92 or 93 points). Some faint organics after half an hour.
Taste: Hey! A surprisingly serious bite; antique smoke along the lines of some Glen Gariochs bottled in the 1970’s. Tannic.
None of the luscious sweetness of the nose. In fact, it’s quite austere – with the wood growing a tad too dominant in the finish.
Verdict: 90 points – a glorious Glen Grant on the nose; lacks the body and finish required to climb further into the 90’s.
Many malts this old suffer on the palate. The wood and tannins takes over and suck out most of the sweetness.

3) Old Farm 1938/1943 100 Proof Straight Rye Whiskey (50%, OB, USA) – another sample from Hans Offringa.
Nose: Woohaah! Wood and fruits, not unlike the Glen Grant. Rich and fruity. Smoke and organics after half a minute.
Unfortunately, the magnificent nose loses steam after ten minutes. Something metallic? Then pure grain smells emerge.
It has lost most complexity after fifteen minutes, but has grown notably sweeter in character. More oatmeal and grains.
Taste: Rich and smooth with growing amounts of wood and smoke. More meaty notes with refreshing hints of mint. Wow!
Unfortunately it loses steam after a while, just like the nose. Almost takes a medicinal direction at times. Smooth & sweet
Verdict: 90 points – making it by far the best American whiskey I’ve EVER tried! Thanks, Hans! A real eye-opener.
Not quite as complex as the Glen Grant – but what would you expect after just five years in the cask… Amazing…
The sweetness emerging from the empty glass is an experience in itself. That lifted it from 89 to 90 points.

These two old whiskies (in two different senses of the word) are surprisingly similar. Just like I’ve had to revise my ‘conservative’ opinion about blends after a sampling session with some ‘antiques’ at Van Wees last year, it seems that I now have to revise my opinion about American Whiskeys. Quite a few maniacs (including Davin, Louis and Michel) have been ‘preaching the gospel about bourbons’ and we’ve just invited a few producers of American whiskey to the Malt Maniacs Awards 2007 – but now I’m getting side-tracked.

4) Highland Park 21yo 1984/2005 (56.1%, OB, Gerry Tosh, C#43, 289 Bts.)
Nose: Deep and rich. I think this would be what Michael Jackson calls ‘christmas cask’. Undercurrent of raisins and meat.
Something very vaguely metallic as well. Quite lovely. Subtle, though – maybe I should have waited for a better nose day.
After ten minutes I also got a whiff of sweetish sake and cardboard. Maybe condensed lime juice? Impression of old dried spices.
Taste: Surprisingly powerful and feisty at +/- 56%. Smooth mouth feel turns grittier towards the finish. Touch of liquorice?
Score: 89 points – but I can see why the other maniacs that tried it gave it 90 points or more. Fairly woody finish.

5) Dufftown-Glenlivet 14yo 1966/1980 (45.7%, Cadenhead’s, Dumpy bottling, 75cl)
This sample came from Bert Bruyneel and found its way to Holland via fellow Dutch maniac Michel van Meersbergen,
Nose: Hah! Mint and antiquity. Very pleasant on my nose, but no development to speak of. .
Taste: Dusty sweetness. Fairly flat, could be oxidised. Even then, it’s an interesting and ‘austere’ dram. .
Score: 81 points – b.

6) Glenury Royal 12yo (40%, G&M Licensed, John Gillon & Company, Btl. Early 1980’s, 5cl) – sample from Michel
Nose: Ah! Sweet & malty start. Subtle ‘veggy’ notes emerge, but they are very well integrated with the sweetness.
Metallic. Not the sort of profile I instinctively like, but a surprising complexity that almost pushes it into the 80’s.
Taste: Oy! Dusty. Weird start… Even a hint of something medicinal? Vaguely minty and metallic as well.
Score: 80 points – maybe just a tad oxidised? Still very interesting – almost enough to make it to 80 points.
In fact, after some 10 minutes in the glass it made the jump to 80. Yes, I would recommend this.

7) Tullibardine NAS (40%, OB, ‘Painted Label’, Bottled +/- 1995, 5cl) – I didn’t see an age statement on the miniature bottle.
Nose: Sweeter than I expected – and not as oily. Quite pleasant actually! What a nice surprise…
Taste: Ouch… For a moment there I thought I could actually recommend a Tullibardine. But then I tasted it.
It has the oil I loathe, although there’s a pleasant coffee influence towards the finish.
Score: 70 points – which still isn’t bad for a Tullibardine, mind you.

8) Pittyvaich 12yo (43%, Flora & Fauna ‘OB’, +/- 2000)
Nose: Herbal broth with a nice touch of fruit. Pleasant sweetness. Over time ‘veggy’ elements take over.
Taste: Starts out sweet (but rather undefined) on the palate as well, but disintegrates towards the finish.
Not spectacular, but an interesting twist of liquorice in the finish kept it well above average.
Score: 78 points – not my kind of profile but interesting…

9) Cragganmore 15yo (57.8%, Cadenhead’s, 35cl, Bottled +/- 2006)
Nose: Fruity with a hint of cardboard. Nice enough, but little development over time. Fairly ‘MOTR’.
Taste: Fairly sharp and a little bit ‘veggy’. Nothing else really stood out. Maybe I didn’t add enough water?
Score: 77 points – which is not all that impressive compared to the official bottlings at just 40 or 43%.
Still good whisky, but perhaps a tad below the standards of

10) Bunnahabhain 20yo 1979/1999 (50%, DL OMC, Sherry, 358 Bts.)
Nose: Loads of sherry and burnt notes, occasionally wandering into Bowmore Darkest territory. Hints of soap?
Quite complex within a clear ‘bandwidth’. Subdued sweetness with whiffs of marshmallow and oriental spices.
Taste: extreme amounts of sherry and smoke. Rough mout feel – possible oxidation of the sample? Old fruits. Buysman?
Score: 88 points – but it needs some time to get there. Just a smidgen too roasted & toasted for my tastes.
With a smoother mouth feel and some sweetness on the palate it migh have reached 89 or even 90 points.it

11) Lagavulin 1990/2006 Distillers Edition (43%, OB, PX finish)
Nose: Surprisingly light and fruity start. In fact, it’s extremely fruity. Is this actually Lagavulin? Leather but no peat.
Ah wait, now the organics drift to the surface. Very pleasant. Hey, now the fruits are back. Strawberry? Water melon?
Taste: Smoky, rather than peaty, especially towards the finish. Excellent mouth feel. Maybe lacks some complexity?
Score: 86 points – still highly recommendable, but not everything seems perfectly integrated. Very hot at just 43%.
In fact, after half an hour I was leaning heavily towards 87 points, my score for last year’s batch.

12) Ardbeg 1981/2005 ‘Kildalton’ (52.6%, OB, 5ml from ‘The Peat Pack’)
Nose: Grainy start, quickly opening up into salted fruits (?). Hint of lemon – or detergent perfume? Then real fruits.
Taste: Hah! This also has the trademark ‘delay’ in taste development – the peat takes a few seconds to emerge.
Maybe some salmiak? Over time the finish grew on me – touches of fruit and something vaguely metallic.
Score: 85 points – although I had it at 84 points for most of the time.

And that’s all for now, I’m afraid…